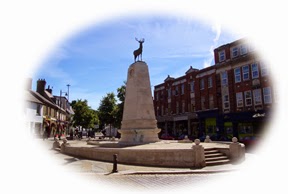 The Hertford War memorial was restored and rededicated in 2001 and Tracy Turner set up a web site with a lot of useful information about it and the names on it. I set up a page linking to it the same year, but Tracy stopped updating her site in 2002. In 2009 I discovered that it had disappeared, and the URL I had given no longer worked, apparently because the web site had been deleted.

Jonty has just emailed me to say the site is now on the WayBack archive. ...
Tracy's Hertford War Memorial Web Site
I have also updated my Hertford page to include information on the site.
Posted by Chris Reynolds at 10:06 PM