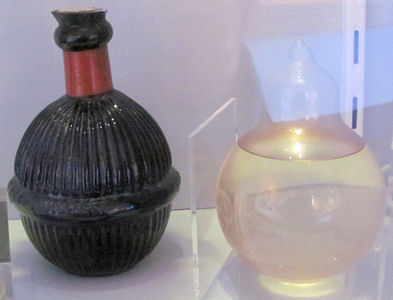 Today I visited  the Tring Local History Museum and they has a new display which had these two items.

Do you know what they are?


The items are Victorian Fire Grenades - an early form of fire extinguishers. A good description occurs on the Hull Museum web site which starts:

Before the invention of modern fire extinguishers, glass globe extinguishers known as 'Fire Grenades' were popular in workplaces and the home in the 19th and early 20th century. These grenades were small and often sold in multiples, and stored in wire frame holders which could be easily suspended near the entrances to rooms. The grenade was designed to be thrown into the centre base of the fire. The glass would shatter on impact, dispersing the liquid salt water or Sodium Bicarbonate solution, putting out the fire and saving the Victorian home or business from fire devastation.

While great claims were made for these grenades their effectiveness must be doubted in the vast majority of fires and some of the later grenades contained carbon tetrachloride - whose fumes would could have adverse effects of the thrower of the grenade!