Why Cyclists stopped at Little Berkhamstead circa 1905 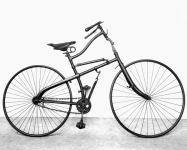 At the HALH Symposiun on Sport in Hertfordshire John Pearson gave an enthralling talk on "Cycling in the Edwardian Period" illustrated with a large number of pictures of bicycles and their riders. These helped to explain the way that the coming of the bicycle encouraged people to come out into the countryside around London - especially Hertfordshire, in the period prior to the First World War. 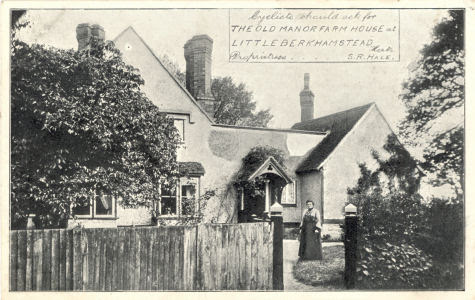 Evidence of this can often be found in early post cards such as this one of the Old Manor Farm House at Little Berkhampstead. All the cyclists touring the countryside would require refreshments - and sometimes overnight accommodation - and signs welcoming cyclists started to appear in the towns and villages of Hertfordshire. At the time there were few cars - but after the war the amount of motorised traffic increased and the signs were replaced by signs welcoming cars.
Posted by Chris Reynolds at 12:51 PM