A Panther shot and killed in Hertfordshire 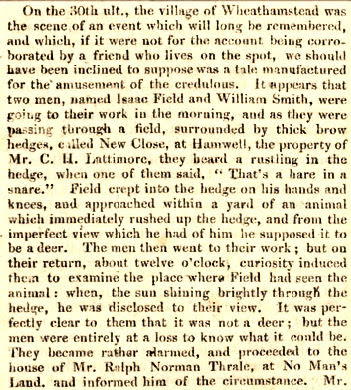 A long account from the Herts Mercury of how Ralph Thrale shot and killed a panther at Wheathampstead is available [Click Here].


In addition to being an interesting and unusual story it turns out that most of the people named are related - and are already mentioned on this site.

Charles Higby Lattimore (1806-1889) was a major farmer with land in Wheathamstead and Sandridge. In 1873 he urged local farmers to sack all strikers in the Sandridge Agricultural Workers Strike.  The Lattimore family owned the Hope Brewery at Wheathampstead - See the Harpenden Brewery.

Isaac Field (born c1813) was, in 1841, an agricultural labourer living with his wife Mary at Gustard Wood, Wheathampstead.

The name "William Smith" was too common to make a reliable identification from the 1841 census.

Posted by Chris Reynolds at 7:30 AM