Take care of your Daguerreotypes 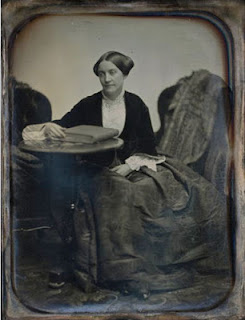 The very earliest photographs in your family archives could be Daguerrotypes - which are firmly mounted in a glass photo frame to protect them.  The photograph is on the surface of a silver plate, with the light areas being silver/mercury crystals (which reflect the light and appear white) and plain silver (which appears dark). There is no negative - so each one is a "one-off" and they can be irreparably damaged if not looked after carefully. After some deteriorated when they were shown to the public in a museum, some detailed research was carried out to find out why they were so sensitive.

If you own such precious pictures from about 1850 you may be interested in an article "The Case of the  Disappearing Daguerrotypes" in this month's Scientific American. There is also a slide show of what can go wrong on the Scientific American web site.
Posted by Chris Reynolds at 3:49 PM