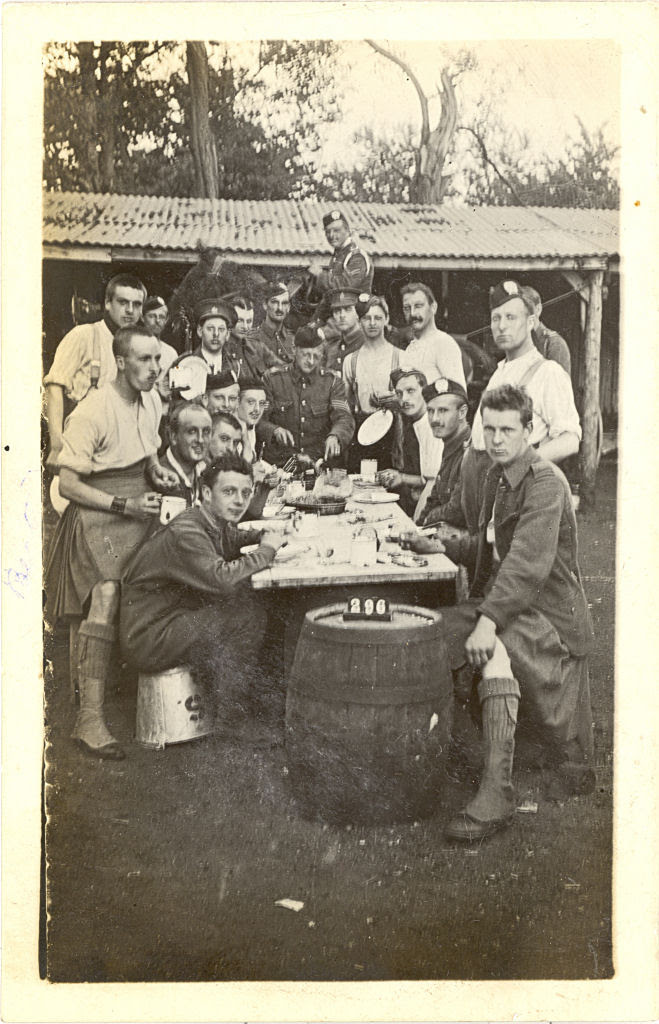 One of the reasons I have a lot of photographs of WW1 troops on my web site is so that they can be remembered 100 years later. This photograph, one of a number on my "London Scottish" page, had been provisionally been dated to August/September 1914.

I have just had the following letter from Andrew Waterston, who writes: The young man in the coveralls sitting on the bucket at the front of your picture is my Great Uncle, 1847 Pte George Alexander Waterston.  He joined the London Scottish in 1913 and was posted to G Company.  He had grown up around army horses as his father had been awarded the DCM serving in the Royal Horse Guards and had gone on to run the canteen above Horse Guards in Whitehall, so the coveralls suggest he may have been employed looking after the officers' chargers - or he may have just been a messy eater!

Yours is the last photograph we have of him. He transferred to D Company and was killed less than 3 months later on the night of 31st October 1914 in the attack on the burning Windmill at Messines.  He was 20 years old.  His elder brother, Will was killed at Festubert in May 1915, unaware that his younger brother was already dead.

The London Scottish were the first territorial battalion, from those who trained in Hertfordshire, to see action. Some senior officers in the 2nd London Division felt that they had insufficient training and after the high casualties on 31st October (undoubtedly involving other as yet unidentified soldiers in the picture) most of the other battalions did not go to France until March 1915.

Many people in Hertfordshire are researching Hertfordshire men who fought and died in the war. Let us not forget the many others who came to Hertfordshire to train or to recover from their wounds. Any postcards (as digital images) and other information about these "forgotten" heroes would be welcome - as every extra clue could help identify both the military units and individual soldiers.

Posted by Chris Reynolds at 7:01 AM