With the coming of the railways it became far easier to live in Hertfordshire and commute to London, and in the latter part of Victoria's reign many medium sized houses (big enough for a family, plus half a dozen resident staff) were built. One of these was Haydon Hill House, Bushey. 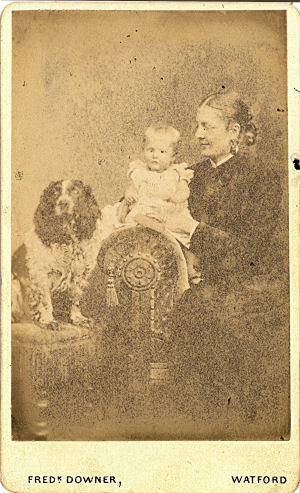 Robert Attenborough was a pawnbroker who married in 1874 and had moved to Haydon House, Bushey by 1877, and his widow was still living there in 1937. Shortly after they move in a mother and daughter photograph was taken by Frederick Downer.

In 1907 post cards of the house were taken by James Thomas Wilden, of Bushey. James appears to have been employed as a photographic operator (developing wet and dry plates) but also seems to have produced some post cards in his own name.

The messages on the two post cards throw some light on the life of young women in service. They were sent by Mabel Constance Bird in 1907/8 when she was working in Haydon Hill House. One requested some music and an instruction book for mandolins, and one wonders whether the domestic staff were encouraged to provide entertainment! The cards went to her younger sister Florence Elizabeth Bird, who was apparently still at home in Denmark Hill, London. By the 1911 census Mabel was a parlour maid in another house in nearby Aldenham while Florence was at a school at Stanmore. A large number of other cards, apparently from Florence's post card album, were on sale on ebay and a spot check suggest that in about April 1912 she went to work at the White House Cottage, Shiplake, Oxon, and was still there in 1917. However there were a number between 1912-1917 to other addresses and it may be that she was employed as a lady's maid and traveled with her employer.

I had problems in trying to trace Mabel and Florence Bird's earlier history, but a very confusing family tree on Ancestry suggested that they were born in Herne Hill (near Denmark Hill) under the surname as Bugg. However as this does not involve Hertfordshire I have not followed this further.
Posted by Chris Reynolds at 8:16 AM