Prince of Wales visits Panshanger and Hertford in 1874

In 1874 the Prince of Wales visited Panshanger and he and some other gentlemen spent part of the time in shooting, and had excellent sport, bagging in one day no fewer than 760 pheasants, besides partridges, rabbits, and hares. The Princess planted a chestnut tree in the grounds in commemoration of the visit. The visit (which included the town of Hertford) was described by The Graphic which printed engravings based on photographs taken by Elsden, of Hertford.

While doing the update I added a press cutting dating the opening of Elsden's Mill Bridge studios to 1872 - providing a benchmark for dating his old photographs, and also an advert from 1876. 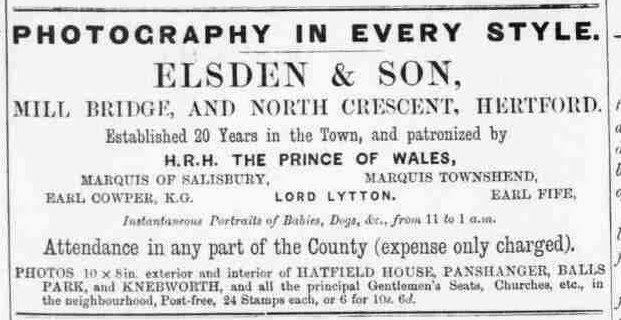 Posted by Chris Reynolds at 9:16 AM