Military Funeral of Private Crichton and other Tring News from 1915 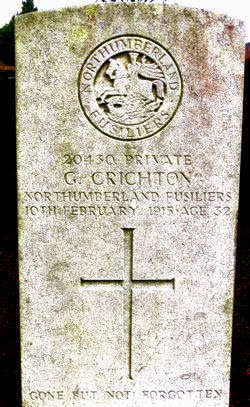 The big event of the week was the funeral of George Crichton, of  "D" Company, 13th Battalion Northumberland Fusiliers, who had been billeted with Mr and Mrs J. Shephard of Lonbgfield Road, Tring, and who was buried, with full ceremony, in Tring Cemetery.
The religious needs of the troops were also to the fore. The Right Rev. Bishop J. Taylor Smith, Chaplain-General to the Forces gave a service, In addition to the regular church parades some soldiers had joined the parish church choir, and the Y.M.C.A. put on an event in the Gem Picture Palace. More everyday needs were supplied by the Rothschild children who gave 300 lbs. of tobacco and 2,300 packets of cigarettes to the men stationed in the town and surrounding villages.
The letter in last week's paper about the verse "The Lads of Halton Park" produced a response from the author, G. Patterson, who was billeted at New Mill, Tring, complaining that it had been reprinted without permission on post cards in Aylesbury and Leighton Buzzard - and he hopes that any profits are donated to charity. The camp was also in the news because work on the butts was nearing completion.
Other news was that Frederick Plumeridge, who worked on the Grand Junction Canal, had died - and the vicar of Marsworth had left and his replacement had not yet been named.
Surnames this week: Anderson, Atkins, Clarendon, Clissold, Crichton, Essex, Francis, Hampden, Holdaway, Kirk, Lang, Mullins, Palmer, Patterson, Pearce, Plumeridge, Prior, Pickett, Rothschild, Sheppard, Smith, Wright
Posted by Chris Reynolds at 3:39 PM