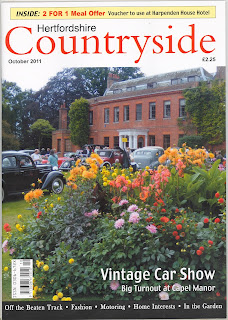 The Hertfordshire Countryside magazine has been going for over 60 years, and the early issues are packed with history. The modern version is better seen as a life style magazine, but each issue contains several articles (typically of 2 or 3 pages) of particular interest to people interested in Hertfordshire local history. The following articles in the October 2011 issue caught my eye:

Hemel Hempstead. A short history of the town, with modern picture of old buildings, including four surviving public houses.
Trigg's Coffin. The Reader's Letters section includes a historically interesting account of the contents of Trigg's Coffin, which is in the rafters of a barn in Stevenage.
Activity Centre. This article looks at the many different village halls in Hertfordshire, from the 500 year old town house to the very modern. It made me think about the fate of the many corrugated iron and wooden huts which were erected 100 years or more ago, both as temporary chapels and as community halls. Most have not survived, and I wonder if any of the survivors in Hertfordshire now have listed building status - or will all be lost. I know of plans to demolished  a former wooden World War One army hut, re-erected in the 1920's as a small church and now used as a community centre.

Posted by Chris Reynolds at 9:14 PM