Where was your Victorian letter posted? 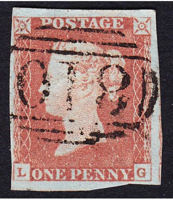 During Victorian times (and for a few years afterwards) postal stamps were sometimes franked with an oval which contained a number - representing the post town. In this case this imperforate penny brown has been franked with stamp 810 (upside down) indicating that the letter was posted in Tring.

To help you identify such numeric franks I have listed all the numbers associated with Hertfordshire towns, with a link to a site covering the whole of England.