Brief news from the current week

Passenger Lists: Further to my posting on Coopers of Berkhamsted - Links with South Africa, which found the outgoing passenger lists on FindMyPast very useful,  I note that Ancestry has incoming passenger lists - but have not followed this up. 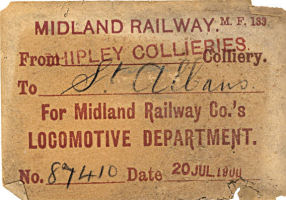 Coal for St Albans Railway Station:  It is easy to forget in these days of electric railways that 100 years ago everything ran on coal - as these two tickets recording the delivery of coal to the Midland Railway's locomotive Department at St Albans show.


William Kay of Tring Park: Sandra adds a follow-up to the posting from 2010 and I note that press reports at the time gives two additional addresses at the time of his death of possible relevance (See British Newspaper Archives): 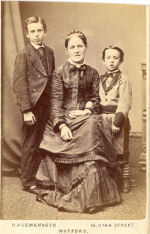 CDV by Leménager: Henri Victor Leménager was a photographer in Bushey & Watford between 1861 and 1887. I have just added to his page an additional carte de visite (large image available) showing a mother and two sons (unfortunately unidentified) on yet another card base. I am still looking for datable copies of his pictures so I can associate the different card bases with an approximate dates.


Hertfordshire Countryside: The July Issue includes several items which might interest the family historian. (Links are to relevant pages on this site.)


Donations: Further donations received this week mean that so far this year I have raised £485 for the mentally ill in Hertfordshire.
Posted by Chris Reynolds at 9:28 AM