The Photographer, The 2nd Lieutenant, WW1 and Hemel Hempstead 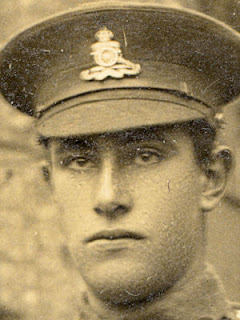 This post is nominally about John George Lawrence, Photographer, Hemel Hempstead, 1914-1919 but touches a number of other issues.

John came to Hemel Hempstead in 1914 and set up a business as a photographer in Gadebridge Lodge. In 1916 he was called up and on his return from the war in 1919 he was evicted, saying to the court "Is that what I get for fighting for my country." This reminds us that the returning heroes did not always find things easy. It is also worth noting that he never made the trade directories which were published in 1914, in 1917 (when he was in the army), and in 1922, when he had apparently left town.

It is not certain what month he came to Hemel Hempstead, but there was a big demand for portraits of young men in uniform once the war broke out and the photograph that trigger this post is of a young second lieutenant in the Royal Field Artillery and the picture may have been taken because he had been newly commissioned.

But who is the young man? Sadly this is just another of many First World War photographs which record an "unknown soldier" because the person who once cherished it knew who it was and sadly never wrote the name on the back. So can you help recognize him? And are all your important family photographs adequately labeled for future generation?

When I wrote The London Gunners come to Town I recorded details of the RFA units who were billeted in the town. The book mentions many (but far from all) of the second lieutenants - so he may be one of the officers I wrote about. In case it triggers a memory I have listed the names and units on the main site - but as a quick check the surnames are

Posted by Chris Reynolds at 9:41 AM