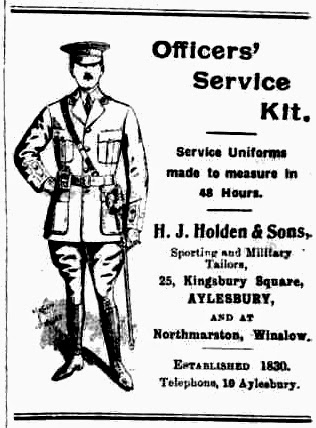 For temporary technical reasons it has not been possible to post the normal detailed report on the main web site. Until the problem is solved a few selected extracts from the Bucks Herald of 13th March 1915 are being posted here.

The Council Election.
Polling to fill the casual vacancy on the Urban District Council caused the death of Dr. Brown took place on Friday, 5th inst., at the Market House, Tring. Mr. Roland M. Vaisey was the deputy returning officer. There were two polling stations, at the first of which Mr. R. M. Vaisey presided, with Mr. A. H. Randall as poll clerk. At the other station the presiding officer was Mr. J. H. Casey, and Mr. H. N. Hedges was clerk. There was an utter absence of interest displayed in the proceedings, only about a fourth of the electors the register taking tho trouble record their votes. It is difficult to understand this apathy, seeing that there was such apparent eagerness to nominate candidates for the vacant seat. The votes were counted immediately after the close of the poll, and the result was declared as follows:- Mr. William Smith, 149 (elected); Mr. John Bagnall, 66; Mr. John Smith, 48; Mr. Edward Wright, 33.


Marriage.
On Saturday, 6th inst.. Miss Lucy P. Steel was quietly married at the Parish Church to Mr. C. Victor Bunker, son of Mr. B. Bunker, ex-superintendent of police at Buckingham. The bride, who was for about 12 years telephonist at the Tring Post Office, was married in a travelling costume, and her only bridesmaid was her sister, Miss K. M. Brown. She was given away by her stepfather, Mr. A. H. Brown. Mr. Percy Bunker (brother) acted as best man. The marriage service was conducted by the Rev. H. Francis, vicar of Tring. Mr. and Mrs. Bunker left early for Bournemouth for short stay.


The Price of Gas.
We are informed that the directors of the Gas Company have had the price of gas under consideration, and a rise of 5d. per 1,000 has been suggested, but they have not as yet decided what the almost inevitable increase shall be.

For Soldiers.
The Rev. Kenneth Kirk, C.F has been enabled, by the courtesy of the Alerta Film Company, to secure the loan of the great picture "The Messiah.” This will be shown at the Picture Hall on Sunday evening next, commencing at 6.45. Admission free. Soldiers only.

URBAN DISTRICT COUNCIL.
The Hospital.
The Matron reported that one case of "Spotted fever" had been admitted to the hospital from Chesham. The patient has since died. Two cases of enteric fever were now in the hospital.
Sanitary
The Sanitary Committee met on March 4. The Surveyor reported that he had applied to Mr. W. Kingham for the payment of 10s. 2d. for unstopping drains at his premises, but had not been able to get the money.
The Clerk was instructed to write demanding payment.
The question of the disposal of house refuse was discussed, the present system being considered unsatisfactory, but no action was taken.
The question of urinal accommodation was also considered, but no action was taken in the matter.
Posted by Chris Reynolds at 8:56 AM