While there were a large number of troops billeted in and around Tring the main military news in the local section of the paper was that there had been two concerts for their entertainment. One was put on by Mrs Williams at Pendley Manor and the other was arranged by the Soldiers' Entertainment Fund and held in the  Medical Inspection Hall (now the Victoria Hall). However in the main part of the paper, covering Aylesbury, there are indications that billeting is to end in April, and the soldiers will be moving on.
One of the soldiers, based in nearby Aston Clinton was before the court for driving a car with no lights and one can only wonder if the police were tightening up after the accident in which two soldiers had been killed a week or so earlier. One may also wonder if some of the road repairs deemed necessary were due to the wear and tear due to the number of troop movements in the area, and the construction of the camp at Halton.
In normal years local gardeners would be able to compete for prizes in events such as the Tring Agricultural Show, but many had been cancelled, However the Daily Mail had announced a grand show of vegetables in London in September, and Arthur Dye, of Tring Park Gardens, was co-ordinating entries for the area.
On the religious front the Baptist Church at New Mill had meetings supporting the Baptist Missionary Society while the Baptist Chapel at  Wigginton celebrated the 10th anniversary of the Sunday school.  There was also the usual order of services for the Parish Church. 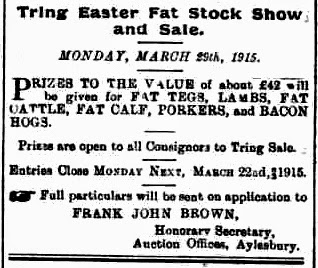 Easter was being celebrated in a different was by W. Brown & Co, auctioneers - who were inviting entries to the Tring Easter Fat Stock Show and Sale - and they were also to sell off a baker's tools and trade utensils - including a dough mixer, a cake making machine, and a waggonette and a useful tradesman's horse.

Posted by Chris Reynolds at 9:49 PM