The Message is in Semaphore ... Andy has kindly translated the message and I have updated the entry on the Hidden Messages page.


More Numbered Valentine Post Cards ... Andy has kindly provided me with a list of Valentine post cards of St Albans - with the pictures taken between 1888 and 1930 (details now on Valentine Page). This all helps to build up a picture of when different groups of Hertfordshire cards were photographed - and the routes the photographers took. In some cases this could help date the post cards were numbers were omitted or are unreadable. I am always happy to have details of the card title, the number and if available the date posted.

Queries need to be related to Hertfordshire ... but is is often hard to know where to drawn the line. Bob's recent query about James Leonard is a case in point. There is no doubt that James married Wilhelmina Gladys Degerlund, of St George in the East, London, by licence at St Peter's Church, St Albans, on the 1st October, 1914. Shortly before this their daughter had been registered in Lambeth as Gladys M Degerlund and it would seem that Wilhelmina specifically came to St Albans to be married.  James (who also came from St George in the East) was described on the marriage certificate as a stock exchange clerk (so normally working in London) of Cunnynhume [sic] Hill Road, St Albans, and the family accounts are that he shortly went overseas in the army. This would all fit with him being in the Territorial Force (as it was then called) with the 2nd London Division. This Division mobilized when war was declared in August 1914 and  moved to war stations in the St Albans area, with most units going overseas in March 1915. A search (helped by Anthony) showed there were war records for James Leonard from St George in the East which seemed to fit - except that he was in the 1st London Division. Subsequent research show this was a case of Right Name, Wrong Body. As there is very little chance of any billeting or other records surviving which link James with St Albans, and further research involves looking for "missing" military records and trying to be certain we have the right James in London. The case, however interesting, is no longer relevant to Hertfordshire and I cannot afford the time to take this further - although some of you might like to help Bob. When I have time I will update the page about James with the evidence to show we had the wrong one. 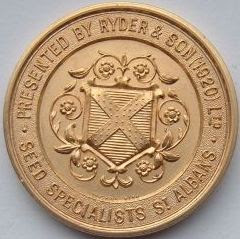 Found in a box of golf markers ... John, from Indonesia, recently acquired a box of golf makers one of which turned out to be silver. He googled to try and find out more and ended up on the page Ryder & Son, St Albans - so he now knows his unusual "golf marker" was a gardening award - from the same Samuel Ryder who foundered the Ryder Cup. It is alway interesting to know what people were looking for when they end up on my site.

The East India College, Haileybury ... I have already got a lot of information about the school at Haileybury which was founded in 1862, including pictures and biographical details of pupils and teachers, 1867-1871. However the buildings, which are at Great Amwell, had been the East India College, and I had very little information about the early days. This has now changed as I have just acquired a battered copy of Memorials of Old Haileybury College, published in 1894. I haven't yet had time to look at it detail (it is 668 pages long) - and it may be a little time before I can do it justice with a dedicated page. However includes a list of former students between 1806 and 1857 (who will almost all gone on to work in India) and if your ancestor was at the college in this period I may be able to provide details.
Posted by Chris Reynolds at 6:07 PM