In 2008 Lynn asked about Wells Pavilion Theatre Company  and while I was able to make a few comments about the visits of this portable theatre into Hertfordshire it is always difficult to follow the movements of people whose movements take them from place to place. Then yesterday Neil contacted me about the pictures with the original posting and after replying to him I suddenly had a bright idea. 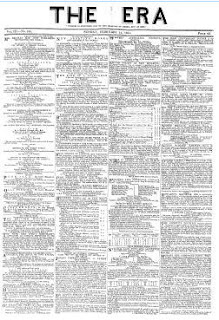 Now that the British Newspaper Archive is online (although far from complete) there might be records of the theatre visiting various towns. So I had a look - and was unsuccessful in locating any newspaper reviews of performances. On the other hand a weekly newspaper called The Era proved very helpful. This paper was first published in 1838 and was supported by publicans - who had an interest in people drinking while being entertained by music hall and similar performances. While it did not report on the performances of the Wells Pavilion Theatre Company it carried large numbers of advertisement for actors, etc.

As a result I found situations vacant adverts for actors and musicians to work at Wells Portable Theatre with various contact addresses between 1880 and 1896. It is not know when the theatre first came to Hertfordshire, but it was at Stony Stratford, Buckinghamshire, in 1881 and later turned up in St Albans, Hoddesdon, Ware, and Waltham Cross between 1886 and 1888. In the following years it gave shows in Derbyshire, Leicestershire, Northamptonshire, Nottinghamshire and Warwockshire. As a result I have updated the time line table I first drew up in 2008.
Posted by Chris Reynolds at 3:06 PM