The First Year of this Newsletter Blog

I started giving online family history help relating to Hertfordshire in about 1997, initially via a bulletin board, and the current web site cane into existence in April 2001.  A year ago I decided the site needed a new look - as it was showing its age. However the site now contains over 12000 files (text and pictures) and a complete restructure was considered impractical. So far this year there have been approximately 174,000 visits made to the site - so the target of 250,000 visits is likely to be reached.

From the beginning the site has included pages giving details of the latest updates and it was decided that a separate newsletter blog would provide a user-friendly new interface which could deal with more ephemeral matters. 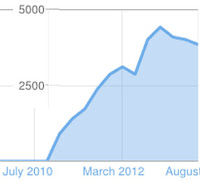 From my point of view the experiment has proved successful - and the statistics show a steady growth, with one explainable dip, plus a small  fall off during the summer months which are partly due to lower activity on my part, and partly seasonal. In the last 12 months there were 35603 page views with the top countries being the UK (17285), USA (6582), Australia (1410) and Canada (1274). There were also 2152 visits from Russia - butI don't believe many of these were genuine visitors but were almost certainly due to some "spam" type activity. Once the darker evenings come it I expect the number of views a month to increase and perhaps reach 5000 per month.

One advantage is that the simple statistics gives quick feedback as to which posts generate interest and which are rarely read, and allows me to plan postings. For instance it is clear that the calendar of events I tried out not worth my time drawing it up, but if local history society alerts me to something they are doing - or about new publications - posting up details attracts more interest and takes very little of my time. I would like to see more people making comments.- as I feel the percentage of lurkers, who frequently visit the site but who never make a contribution is too high. (Have you got any ideas how I can encourage more people to actively contribute to the site?)

The only disappointing figures relate to donations - but there is still time to reach the the £1200 for the mentally ill in Hertfordshire by the end of December
Posted by Chris Reynolds at 1:30 AM