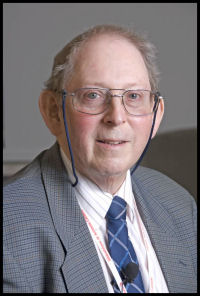 I have just learnt of the death of Chris Watts at the beginning of August, and I suspect that many of you will have meet him, or read one of the book he wrote jointly with his brother. He was for a time the chair of the Society of Genealogists and worked at the Nation Archives at Kew - both as an employee and more recently as a volunteer with their Friends organisation. He also gave talks on genealogy subjects, both in England and overseas.

I last met him almost exactly two years ago, when he was giving a lecture on the High Court of Justice records at Kew. We first met when we worked together on a major military computer system called Linesman over 40 years ago, in the middle of the Cold War and while there are a number of obituaries relating to his genealogical work I feel a story on a different aspect of his life is appropriate.

The Linesman hardware was already archaic when we were working on it and the computer complex was huge by present day standards. When a parliamentary question asked how big the computer was the answer was "Half an acre" (= 2000 sq.m.). The computer room had originally been built to hold 32 computers each of which consisted of 18 cabinets - and the effective processing power was probably not much more that the 1980s BBC computer (an early personal computer designed for school use).

We were both working for Plessey and for a time there were six of us working together as a systems design team in an office at Stoke Poges. Someone had put a note on the door "Chemistry Department - Ph.Ds must be shown" Both Chris and I had Ph.D.s in chemistry and everyone one else either had a chemistry degree or a Ph.D. (If this seems strange, the British Universities had been turning out more chemistry graduates than were needed to do chemistry related research and development - but industry was crying out for managers with a good science background, particularly in the rapidly expanding computer industry.)

Many aspects of the Linesman project were deemed to be "Top Secret" and Chris found it frustrating trying to design a system when key aspects were so hush hush that the systems designers were not allowed to know them. One morning he came in with a great big smile on his face, and told us he was about to phone one of his RAF contacts to ask a "forbidden" question - which was how many Russian bombers were flying over the North Sea on a typical day. When his contact refused to give an answer Chris then asked "Can I use the number given in the Panorama programme which was broadcast on the BBC last night?" - Later that day his contact phoned back and sheepishly said "Yes".

If you have any memories of Chris why not add them as a comment here.
Posted by Chris Reynolds at 7:57 AM