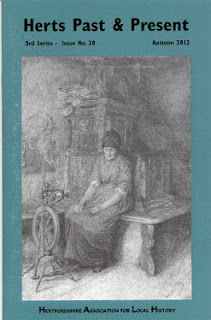 The Autumn Issue of Herts Past and Present (published by the Hertfordshire Association for Local History) is out and the following description of the three main papers is based on the editorial.


The poor are always with us. In Begging Letters from Hertfordshire paupers living away from home the poor from the late eighteenth and early nineteenth centuries speak to us in a particularly vivid way, through their letters written in desperation to Hertfordshire parish overseers. Carla Herrmann's study of fifty such begging letters reveals a range o' causes of their destitution: from disease, violent insanity, to injury caused by accidents at work. Widows with dependent children had a particularly hard time of it. Grace Pryor, whose husband had died after falling down a well in Royston leaving her with three children, got short shrift from the Royston overseer in 1783. He sent her back to Heydon in Essex, whence she had originated. Then as now it was economic interests that counted in the decision whether or not to offer support. If you couldn't prove your worth to the parish you had a struggle to claim benefit. "Supportive attitudes appear to have been comparatively rare" is the author's conclusion so far.


Sarah Lloyd's intriguing article "Tickets Please!" Survivals from eighteenth-century Hertfordshire tells us what tickets can tell us about social history and is a summary of our Lionel Munby lecture at the AGM in May. It shows just what can be read into these most ephemeral of items. That old ticket found under a floorboard tells a story offering a window into many varied aspects of eighteenth-century life.

Researchers into The Manors of Watford will find the list of sources suggested by Gordon Cox most helpful. The Victoria County History is recognised as no longer adequate to the task. Ranging further afield the quest could take you as far afield as Reading, Woking, Chester and California. Not to mention London, Oxford and Cambridge. Why can't records stay put?
Posted by Chris Reynolds at 7:00 AM