Another WW1 post card - Middlesex Regiment, by Cull of Watford 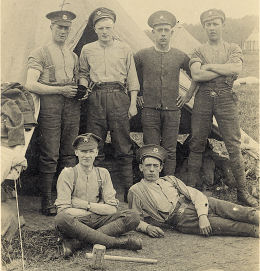 Five of these soldiers have the Middlesex regiment cap badge and a large version of the picture, which should make it easier to recognize any of the men, can be seen on the Later Troops at Watford page. I have not yet been able to pin down an exact date for when the regiment troops were based in the area. The message on the back suggests they were about to leave the area and go to "the seaside." The writer also asks his wife to sent fifteen shillings to he can make up deficiencies in his kit. 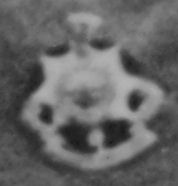 One of the soldiers had a different cap badge which I have not been able to identify.


The photographer was Harry Cull, of Watford, and the number 9162, which is the highest reference number I have found for him.
Posted by Chris Reynolds at 6:55 AM