How many pictures did an early Victorian photographer take in a year? 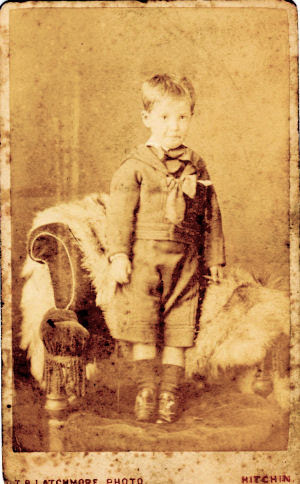 Jackie has sent me a carte de visite she believed to be of John (Jack) Christy by T. B. Latchmore, of Hitchin. John was born in 1911 and the photograph shows John in short trousers and he is about 5 years old.

Carte de visite were common in the 1860s, but started to be replaced by the larger cabinet cards in the 1870s - and were rapidly going out of fashion in the 1880s. It seems unlikely that this card, which otherwise looks like a typical Victorian carte de visite was produced in about 1916. It seems very likely that the picture was of John's father, Harry who was 4 years old, and living in Ashwell (near Hitchin) in 1881.

When one compares the negative number with other CDV by Thomas Latchmore it seems that he was taking about a thousand pictures a year. This should allow the approximate dating of numbered cards with no other date.
Posted by Chris Reynolds at 9:12 PM