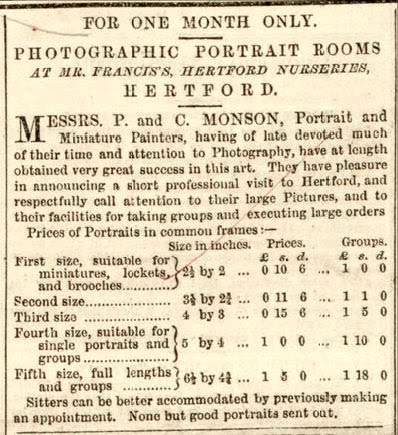 David Simkin, who runs the Sussex Photohistory web site kindly drew my attention to the fact that P & C Monson had been taking pictures in Hertford as early as 1853. I decided to follow this up by using the British Newspaper Archive, via FindMyPast, to see if I could reconstruct the early history of commercial photography in Hertfordshire, using references in the Herts Mercury and  the Hertfordshire Guardian, both of which have been digitised for the relevant period.

It turns out that a photographer called Mr Williams had been at the Bull Inn, Hertford, in 1851. The first local photographist was a daguerreotypist called H F Cox in Fore Street in 1856 while Hart & Craddock were operating from North Crescent (later Arthur Elsden) in 1857. Charles Forscutt was operating at the Old Cross by 1859 and a plumber called John Charles Garrood started taking photographs in Ware Road, Hertford, in 1864.
More Information

I have also added many early photographic adverts to the Arthur Elsden page.
Posted by Chris Reynolds at 8:00 AM