The Ruins of Minsden Chapel, near Hitchin 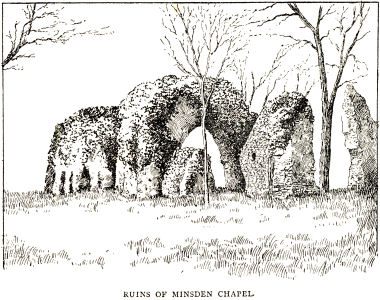 Usually if you ancestors were married in a church the building, although perhaps much changed, is still there. But if, for example, your ancestors were include George Lyle, who married Susanna Hanscombe in Minsden Chapel in 1737, or Enoch West, who married Mary Horn the following year, all you would find if you visited the spot are ruins. I have just posted a detailed account of the history of Minsden Chapel, (which was in the parish of Hitchin, but is now in the parish of Preston) which was published in 1913.

The chapel has attracted the attention of poets and the article ends with a poem describing the ruins written in the early 19th century which begins.

No pomp of art, no jewelled shrine,
No tombs of gilded splendour shine
In Minsden's lone remains,
Nor Parian marble's vivid glow,
Nor mimic works of art that show
The sculptor's faultless pains.

An even earlier poem, written in 1750, sometimes applied to other ruined churches, such as the one at Thundridge, includes the lines:

Is this the place where numerous footsteps trod,
Where living votaries fill'd the house of God?
Where the full chorus of the sounding choir
Bade one loud strain of prayer and praise aspire?
How silent now the desolated spot,
Its paths untrodden and its use forgot!

Posted by Chris Reynolds at 7:20 AM