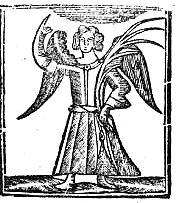 Caroline came up with a unusual question - relating to "A Happy Child" from Barnet who is mentioned in a spiritual song that was circulating in the United States and was first published in Boston, Massachusetts in 1767.

I investigate and find that a Presbyterian Minister, who was also a poet, left a chapel in Barnet in 1760 and went to America. He returned, initially to Ireland, in 1766 (the year before the song was published) and some years later his son married a lady from Boston, Massachusetts!


So he is a prime candidate for being the author - or is he???  I then find a broadside ballad entitled "A Children's Example" in a collection of English ballads, mainly from the 17th century, although some could be as late as 1790. Is it possible that Dr Thomas Marryat wrote the poem when he was at Barnet to frighten children to be good and God loving, had it printed, and then took a copy to America? Or perhaps it was a much older ballard with no connection with the rather eccentric doctor?

I don't know - so what do you think after reading the evidence at Thomas MARRYAT, Barnet, 1760 and "A Happy Child"
Posted by Chris Reynolds at 8:03 AM