Bill is researching First World War rifle ranges - and has discovered that there were regulations relating to a Hertfordshire range called Chalk Hill. But where was it?

Such questions can be difficult to answer - for instance I am still trying to locate Briton's Camp at St Albans - but in this case Bill was in luck - as there are two mentions of it in my book, The London Gunners come to Town which clearly indicates that there were two ranges available to the 2nd London Division (Territorial Force) when they were based in St Albans in 1914/5. 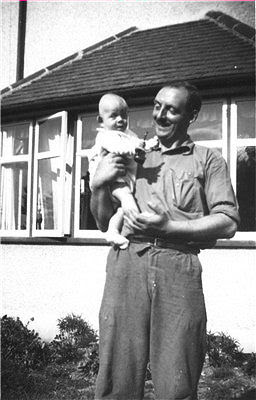 While the original records do not specify the exact location there was a rifle range on part of Hammonds Farm, Sandridge and I have presented the evidence that this was almost certainly the right one in Chalk Hill Rifle Range, Sandridge, First World War.

In fact the range is of specific interest to me as Hammonds Farm has been farmed by my ancestors (with one break) between 1803 and 1939. and this picture of me (aged six months) was taken less than half a mile from the range!.

Bill and I have now exchanged notes - and found more evidence about the rifle range. It would seem that the wood was planted to screen the range and it was used by the 8th Battalion Sherwood Foresters in October 1914. It would seem to have been used until the 1950s.
Posted by Chris Reynolds at 7:00 AM