Flog It from Ashridge on BBC TV today

I have just been informed that the Flog It programme filmed at Ashridge House last year (see Flog it at Ashridge House, near Berkhamsted and I didn't Flog It at Ashridge) is to be broadcast this afternoon at 4.30 pm and will presumably be available on BBC Iplayer for about a week. I will be interested to see what they decided to sell.

~~~~~~~~~
Well - none of the items they decided to sell had any strong Hertfordshire (or Buckinghamshire) connection but much to my surprise I ended up in the background of one of the valuations! 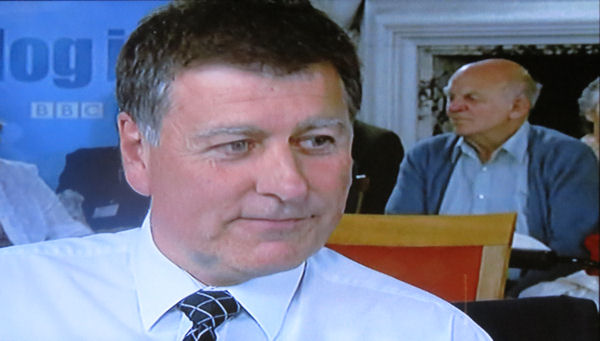 It was interesting to see how they arranged the background as it was always changing and there was no way you could arrange to be in a shot. In the camera foreground was the table where the valuations were being filmed. Behind them were several tables where the preliminary assessment were being made to see which might be selected for filming. Behind them again was a double line of chairs snaking round the room. These chairs were in fact a queue and when someone moved to a selection table everyone moved on to the next chair. In fact the queue extended round a corner into a second room. Part of this queue can vaguely be seen through a connecting doorway behind my head.
Posted by Chris Reynolds at 3:19 PM

Email ThisBlogThis!Share to TwitterShare to FacebookShare to Pinterest
Labels: Ashridge, Flog It