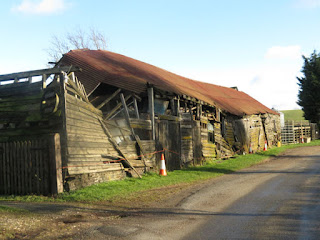 I decided to spend News Year's Day afternoon visiting parts of Aylesbury Vale near where I live. I started by driving through Drayton Beauchamps where this old barn has seen better days. When I was small, some 70 years ago, every farm seemed to have a barn like this, still in active use. Now seeing one, even in this tumbling down state, is rare. Almost every disused barn has been converted to expensive housing. 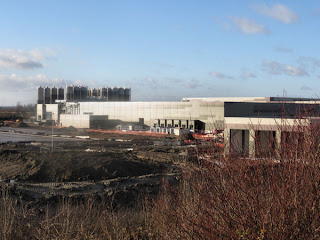 I next went through the Village of Buckland and from the bridge over the Aston Clinton bypass I took a picture of what had been excellent farming land - as green belt as you could find anywhere - only last year. (See Google satellite view - which still shows the site before development.) The ARLA plant is still being built and will be a massive milk processing centre. Things have moved on since I first saw cows being milked directly into a pail, the milker sitting on a three legged stool. The milk was put into churns which were left outside the farm gate to be picked up by the local dairy. 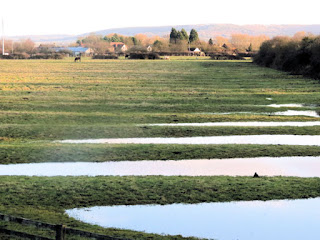 The ARLA works lie between the bypass and the canal and I next visited Broughton, a couple of miles nearer to Aylesbury and took this photograph of the partly flooded fields by the canal.  Some time ago I posted some photographs of the medieval field systems that had been exposed in Wilstone and Starttops Reservoirs during the 2011/12 drought. The old medieval field at Broughton is one of the best preserved examples in the area, the furrows being highlighted by flooding in the foreground. Its original shape can clearly be seen on Google satellite views. The only significant change is that the canal, built 200 years ago, cuts diagonally across the field.
Posted by Chris Reynolds at 11:02 PM